1.)Read Books as often as possible

I totally understand that you are into baggy FuBu clothes and Air Force One Nike’s. I even got that you have a fascination with blackplanet.com and Yahoo Messenger. The problem you are failing realize is that you are not reading any books. You don’t need any money because there is a library located immediately across the street from your high school, filled with invaluable knowledge. Reasons you need to read books is because you have no idea of who you are as an individual. Black History is just another month where you accept the cliche stories with polyanna dialogue. You have no knowledge about racism other than Spike Lee movies, and have no idea how diluted the presentation of Slavery is. A book has no cut scenes, or time limits. Depending on the author you choose, a book will give you the unadulterated truth about anything you wish to learn. You have to learn about a lot of stuff that your parents are filtering out of your life. When you read, you create a mind filled with perspective. You develop from a boy into a man.

Unfortunately, most of the family members you grew up to revere will perish, and your parents will become disabled and sick. I hate to be terse, but you need to come out and speak to your family, because heart disease, cancer, and other afflictions will take them away. Humans only have so much time on Earth before the next chapter. Nobody is exempt, e.g.,the King of pop and Whitney Houston will punch the time card soon also.

I understand that you grew up with each other since childhood, smoked chronic, and called the party-line together. Yes, those HALO multiplayer tournaments on the XBOX will be epic. Your friends are NOT forever. One day you will meet that special woman who will carry your child, and co-found a household with you. That whole “Bros before Ho’s” shit will be out of the window and you will catch the cooties. Despite the occasional argument, you will want to spend every waking moment with that person. Hitting the club to chase some bourgeois broads will become old. Making passion to someone you love will become more than just “gettin’ sum”, it will feel special. Hanging out to have occasional talks will always be there among true friends, however, life will split the bond into different trajectories.

4.)Think broader than being an ATHLETE or RAPPER

So, you got your Rocawear T-shirt on with your Sean John Velour suit, you think you got bars that will change the world. You feel like you can spit in a cypher with Ludacris and Busta Rhymes and they will sign you. Eminem is the rap version of Tiger Woods and you feel inspired to be the next big talent. The problem with that logic is that everyone in the ‘hood’ is trying to do the same thing. The market for trying to be an athlete or rapper is shamelessly over saturated. Everyone is trying to do it. It’s so many artists that are working three times harder than you, and fail miserably. That is not to say that you cannot make it. If you figure out how to come out with a catchy dance with a song, you will become popular and attain fame. For how long?.. Then you become a one-hit wonder who never gets heard from again. If you wish to be long-term, prepare for lots of thieving and song stealing from people with more clout. Prepare for performing at shady clubs with no crowds and no money. How about meeting prominent people in the industry who make false promises to you? Guys who promise they will listen to your CD in the club you performed in, only to find it thrown in the garbage or even littered in the parking lot. The rappers that are in front of the camera, have a combination of extreme tenacity, talent, and luck that makes them exceptional. So, I ask you, how do You want to be a rapper, and never attempt to read a book about how the music industry is. Being a rap artist is business, and you have no knowledge of the industry. Think about all of the rappers who never made it because they never understood contracts. Think broader than rap. The manager/agent who is behind the scenes making 10% of all of the commissions of popular artists are making a steady income. The rapper is constantly under pressure from fans and record labels. If the next song is a flop and your album goes foam, adios amigo. Think about the guy working behind the scene who owns 40% of the shares of the label. He sits on his ass making mailbox money, while you slave and dodge gang-member club fights every night. This is where reading books comes into play. Being a Dentist or Engineer may sound boring, but it will probably place you in a more secure position, than a volatile music career.

5.)You have been lied to

Being the diligent and good boy that you are, you believe everything that your mommy and daddy tell you. Even Tupac lied and said America is not ready to have a Black President. All of the cliche sayings that you hear, i.e:”hard work pays off in the end”, “great things happen to those who wait”,”rich people are the root of all evil”, and “Go to college and get a degree to be something in life”, are at best half-truths. The reason you believe in God is because of what your parents taught you, which was the result of what their parents taught them. For instance, were people who existed before Christ, spurned to hell, because of not knowing him and accepting him as their Lord and Savior? Its not to say if he is real or not, just an interesting question to ponder. Great things don’t happen to those who wait. If you procrastinate long enough on a opportunity, it will pass you by and you will fail. Rich people are not the root of all evil. Contrary to popular belief, rich people that you assume are assholes are not evil. Most rich people voted for Bush because of tax and financial purposes. Yes, there will be greed among the highest businessmen in America. The billionaires will be  in a category called “one-percenter”(not the bike club, more like the yacht club). 2008, will be the year that the economy tanks and media will sensationalize the wealthy as crooks. Collectively as a group, the wealthy are some of the most altruistic people you could meet. They donate to many causes that the government doesn’t interfere with. The opulent businessmen of America create full-time jobs for the middle and lower-class society. A rich person loves a country ran with less government and more autonomy. A millionaire wants to feel that he can operate his businesses and make money without government  interference. Rich neighborhoods are usually safer than poorer ones. A poor person has pent up aggression towards the world  for people not showing compassion for his or her struggle. A poor person will rob and steal from another person, not for the sake of enjoyment, but for survival. Lack of money brings in stress. Stress begets anger, and anger impels a man to do something he may later regret. These are reasons why crime rates are higher in poor neighborhoods. Go to college and become something is anecdotal. For some it may be a rite of passage, And for others it was an expensive waste of 4 years for a defunct or obsolete education. I personally feel an empty void for not going, so its something you should do. Go and study computer engineering because it will be a booming industry. Get an MBA afterwards and combine the two. Hard work does not always pay off in the end. I work 60+ hours a week and yes I make decent money, but the lifestyle is overwhelming. Smart work pays off in the end. Work hard if you have a personal business that you building from scratch. Work smart if you want to be wealthy. As a garbage man, you will encounter plenty of rich people who let their money work for them. They are not stressing over retirement savings, because they own apartment properties and franchise restaurants.

6.)Technology will make everything better

Anything that you will imagine will become better. No more newspapers for information, news literally popping in front of your eyes in real time, as it happens. Camera surveillance that will be ubiquitous(everywhere) with videos going viral of scandals. From dating to doctor visits, the internet will make life very easy. The Nokia phone with polyphonic ringtones will be dead. The mobile phone, however, will be almost more important than a wallet. The mall that you frequent will only be of use during “Black Friday”(after Thanksgiving) sales. E-Commerce will take over the hassle of waiting in line at a brick-and-mortar store.  Circuit City will be replaced and everything will be digital. Cars that have GPS navigation, just in case you get lost. Downloadable video games and their will be a solution for everything. Hence, the reason I alluded to studying the computer field when I spoke on broadening your occupation choices. The future starts now. 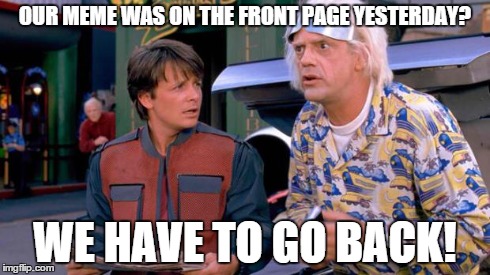 Enjoy your youth and innocence. Smoke weed,clown and joke as much as you can. Meet as many women and partake in any activity you wish. Travel across the globe and meet different cultures. Appreciate the times of laughter and feeling immortal. Make no rush into growing up and becoming an adult. You may hate being told what to do 24 hours, 7 days a week with nonstop nagging. It will be awkward coming home smelling like weed and being paranoid that you are sticking out like a sore thumb. You will hate your parents insinuating what jobs or major you need to take, so they can impress their friends. Whats worse, is when they start asking you to chip in on groceries! Wow! the gall of your parents, how insensitive and cruel of them. Now, fast forward your imagination to a future date to where either I am at, or later.  As you grow older you will lose hair, gain weight, be responsible for twelve times as much, and won’t be able to ask your parents for money; they will be on a fixed income. You will endure new jobs, job losses, bad bosses, bad jobs. No drug use whatsoever, compounded with the stress of being responsible for a whole family. You will have days where you will want to chase opportunities, but will likely consider them unrealistic. Between the fact you have a family you barely get to spend time with, and a demanding job, you will sulk in shame. The more gadgets and bullshit you buy, the more bills you get in the mail, and will be forced to go to a job you don’t love. Enjoy the freedom of not paying rent, and taking the little money you do have to buy off the dollar menu. Life is about to get hard, so age as slow as you can.