This is a viral video that is becoming popular on the internet. Every one who wants to emanate social justice and civil rights are sharing and re-tweeting this romanticized video of peace and lily-flowers. Some Utopian fantasy land, where humans are cars, and biases aren’t formed.

Let’s start off with the “Pro’s” of being color-blind. The origin of this argument is from a Dr. Martin Luther King speech where he stated:

“I have a dream that my four little children will one day live in a nation where they will not be judged by the color of their skin, but by the content of their character.”

I will get to more of that later, the purpose of this is to let you know where this argument stems from. So, a society of this sort would be free of hatred and every one would get along with no judgement made. A world of this sort would have to contain no religions, to eliminate any possibility of racial superiority or acrimony towards homosexuality. Religion would have to be nearly outlawed. The elimination of one religion would cause other religions to suffer as well. Since the society is without bias, the law would have to be fair. Therefore, all religions would be banished.  This would be a society that couldn’t vote for presidential candidates. The flawed psyche of human biases would be eliminated. A blind verbal and written test would be conducted by a machine that would choose a President, solely off of merits. Private companies would have to be complicit with this new law. The argument for equal pay would be eliminated, because companies would have no voting system, and could only conduct blind interviews to select candidates. A blind verbal and written test would have to be conducted by a machine, that uses scores as an indicator of position choice.There would be no two party political system. Cops could not harass a Black person, or anyone without solid evidence. Without bias, there is no possibility of suspicion. More crimes would have to be solved, than prevented.

So far: No gender discrimination, no racism, no two party system. No religions.The society would overthrow democracy for meritocracy. Sounds good doesn’t it.

Here is the negative:

The color-blind thinking is the same intellect of Whites during the Jim-Crow era. White folks, were not bad or terrible people. They sincerely believed that Black folks were too inferior as a race to participate in politics or attend the same schools. Whites feared that many black people were simply “not ready” to be accepted as full citizens. The pressure of keeping up would be too overwhelming for the Negro. This is what is called “spiritual and intellectual blindness”. Conversely, this is what Martin Luther King Jr. feared moreover than racial hostility:

“This tragic blindness is also found in racial segregation, the not-too-distant cousin of slavery. Some of the most vigorous defenders of segregation are sincere in their beliefs and earnest in their motives. Although some men are segregationists merely for reasons of political expediency and political gain, not all of the resistance to integration is the rear-guard of professional bigots. Some people feel that their attempt to preserve segregation is best for themselves, their children, and their nation. Many are good church people, anchored in the religious faith of their mothers and fathers. . . . What a tragedy! Millions of Negroes have been crucified by conscientious blindness. . . . Jesus was right about those men who crucified him. They knew not what they did. They were inflicted by a terrible blindness”

MLK stated this over 52 years ago and can be applied to some of the racial blindness that pervades our society today. Especially with the “#AllLivesMatter movement.  The conscientious blindness of the colorblind cult, becomes a ploy  to mitigate or hinder the #blacklivesmatter movement. In other words, overlook all of the racial injustices being committed, and focus solely on the individual. This hypothesis can be further traced back to Booker T. Washington, who believed that a man was responsible for his own decisions. Character could always overcome circumstance.

“Character, not circumstances, makes the man.”

If you are poor, it is ultimately your fault. You should be capable of overcoming any obstacle with surrounding yourself with better company.  Pull up your pants and get a job Black folks. Figure out a way to succeed despite racial disparities.  A colorblind society promotes this type of thinking. The individual is more important than the situation he is in.

I happen to be part of the W.E.B DuBois camp. DuBois, believed that we needed to stand up against racial inequality and address civil injustices, not ignore the wrinkles of the law.

If there is anybody in this land who thoroughly believes that the meek shall inherit the earth they have not often let their presence be known.

We have been indoctrinated by cloudy pictures of motivational quotes, and catchy YouTube videos of poetry. Barack Obama and Oprah Winfrey are touted as examples of an equal opportunity country. If Michael Jordan can become a billionaire, why can’t you. These are examples of “Black exceptional-ism” . These are anomalies, which are not fully representative of the entire  African-American group. Injustices still exist in America. To ignore the differences in each other is insidious at best.  A black child who grows up in an inner-city in Baltimore,MD. does not  have the same opportunity as a wealthy kid in Beverly Hills,CA. Real estate is a clear indicator of racial segregation. The higher price of the home, the higher the income, the better ranking of the local schools. Due to earning higher amounts of income, these homeowners actively donate and fund-raise for these schools. With the extra income, the school has perks that poorer schools cannot compete with. While many Blacks have financially earned more, so have Whites. Statistics show that Blacks are still behind Whites: 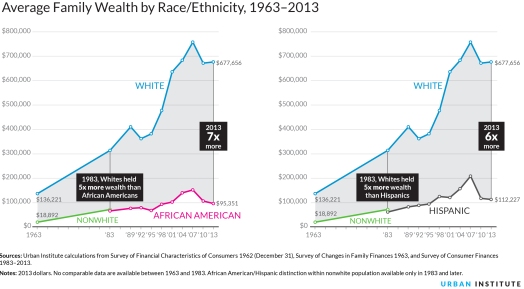 This article was intended to show the guileful nature of a color-blind society. I am not intending to invoke a feeling of  White guilt. I am a staunch believer in racial progress. I believe we can accept each other’s singularities, and collectively march towards a better future. What I am not behind is a society that wishes to ignore each others differences, and play pretend while social inequities are in play. We have made some racial progress in America, by overwhelmingly voting for a Black President, twice. We just haven’t made it to a point where we can ignore both the present and past. I am a Black man, you are (your ethnicity), you have a culture or history that you should be proud of. I am proud to be a Black man based on the fact that my ancestors endured true racial monstrosities that dwarfs the issues I face as an African-American man today. My ancestors fought slavery and jim crow laws so I could enjoy a better life. I will never ignore that, and neither should you. Be proud of your family heritage, and what your grandfathers stood for. Be proactive for the next generation of offspring, so they will enjoy a better life also. Don’t ignore history, embrace it and grow.

36 thoughts on “Being Color-Blind is Wrong!”